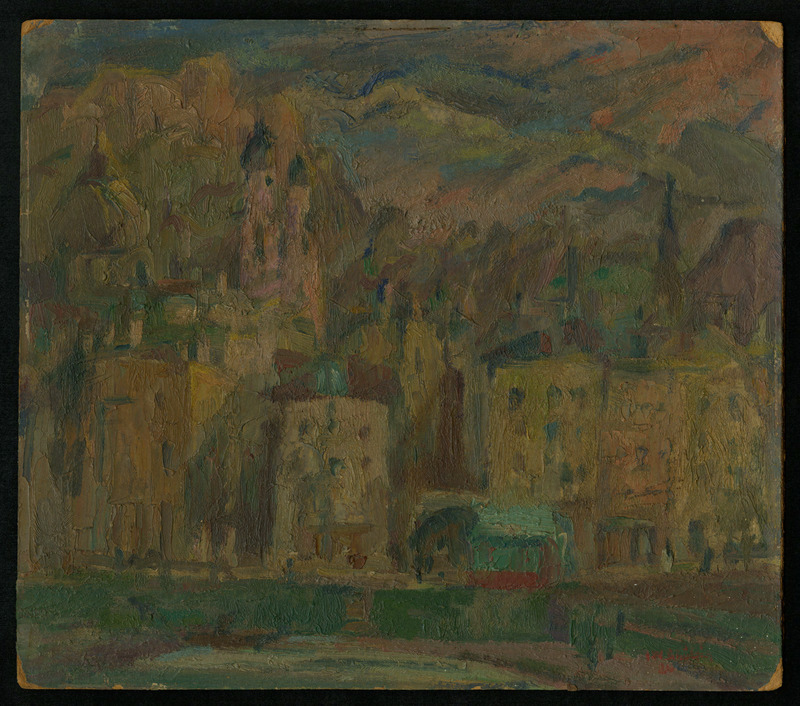 Julius Wolfgang Schülein (1881 Munich —1970 New York). After studying law and philosophy, Schülein enrolled at the Academy of Fine Arts in Munich, from which he graduated in 1907. The next year he became a student at the private art school "La Palette" in Paris where he met the future portrait painter and designer Suzanne Carvallo whom he married in 1912. After Schülein’s return to Munich in the same year, he co-founded the New Secession, a movement dedicated to promoting innovation in contemporary German art. The Schüleins belonged to a circle of prominent artists and intellectuals in Munich. Among their friends were Heinrich and Thomas Mann, Lion Feuchtwanger, Paul Klee and Vassily Kandinsky. In 1930 the Schüleins moved to Berlin. In 1933, with the intervention of the French ambassador to Germany François Poncet the Schülein’s were able to flee to Paris. After the outbreak of the war, Julius was separated from his wife and interned as an enemy alien at Montauban, near Bordeaux, and other internment camps in the South of France. In 1940 Suzanne Carvallo-Schülein fled from Paris to the South of France, where she was finally reunited with her husband in 1941. After a dangerous escape via Spain to Lisbon, they embarked on a ship bound to New York in 1941.

Werner Jacob Cahnman was born in Munich on September 30, 1902, the scion of an old German Jewish family. His mother’s family belonged to the haute bourgeoisie; they were bankers, jurists and industrialists, living in Munich and Nuremberg. He was the nephew of the artist Julius Wolfgang Schülein (1881 Munich —1970 New York). Cahnmann studied at the Universities of Munich and Berlin, majoring in economics, history, political science and sociology. He obtained his PhD from the University of Munich in 1927. Between 1930 and 1938 Cahnmann worked as a counsel for the Bavarian Regional Organization of the Central Association of German Citizens of Jewish Faith (bayrischen Landesverband des Centralvereins deutscher Staatsbürger jüdischen Glaubens). Due to his socialist political activism, in 1934 he was briefly thrown into the Munich police prison for being the “leader of an illegal organization”. One of his former classmates at the University of Munich, Rudolf Hess, was reportedly instrumental in his release. In the winter 1938 he was interned in the concentration camp Dachau. Together with his brother Hans he was one of the prominent Jews aided by Varian Fry in his escape from Europe, and in the summer of 1939 he immigrated to the U.S. via England. He entered the United States in 1940 and soon after partook in a summer seminar for foreign scholars and teachers at the Brewster Free Academy in Wolfsboro, New Hampshire. After holding various academic positions, in 1960Cahnmann finally settled as a professor at Rutgers University. Cahnman died of cancer in Forest Hills, New York, on September 27, 1980. Dr. Gisella Levi Cahnman, his widow, inherited his papers.