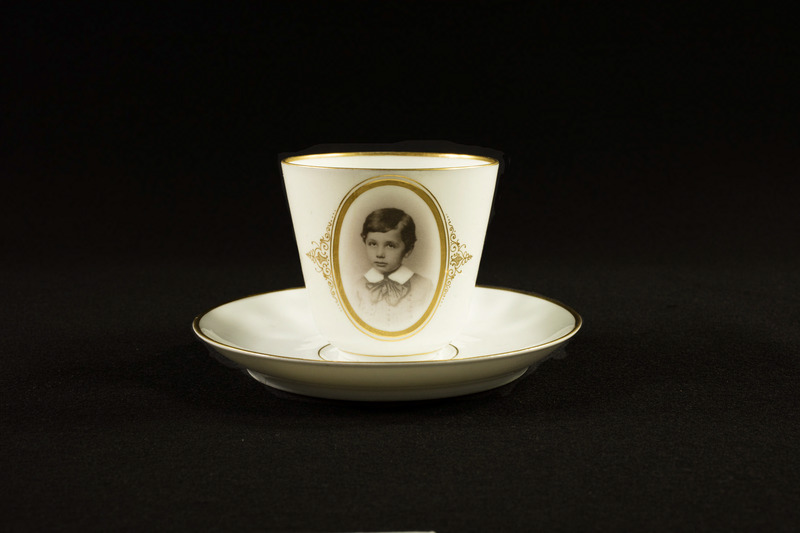 Growing assimilation of the German Jews in the second half of the 19th century resulted in their adopting of the values and lifestyle of the non-Jewish middle class. These cups were made for the Einstein family a few years after the birth of Albert’s sister, Maja, in the early 1880s. During this period, the Einsteins led a steady middle-class life in Munich. When Albert Einstein immigrated to the United States, he took the cups with him. They were part of Einstein’s household in Princeton, New Jersey, where the scientist settled down. Several years after Einstein’s death in 1955, his personal assistant, Helen Dukas, donated the cups to the Leo Back Institute.

Maja Einstein was the sister of Albert Einstein. She was born in 1881, after the family had moved and established an electrical engineering company in Munich, and later relocated to Milan with her parents. In 1909, she graduated from the University of Bern. A year later she married Paul Winteler and the couple moved to Luzern, where Paul found work. In 1922 they relocated to Colonnata, Italy. However, after Benito Mussolini rose to power and enforced anti-semetic laws, Albert Einstein urged the couple to emigrated to the United States in 1939. While her husband was denied entry due to health issues, Maja lived with her brother at his home in Princeton, New Jersey. She was bedridden following a stroke in 1946 and her health progressively declined until her death in 1951.

The Nymphenburg Porcelain Manufactory has produced porcelain since mid-18th century. The factory is part of Nymphenburg Palace in Munich.