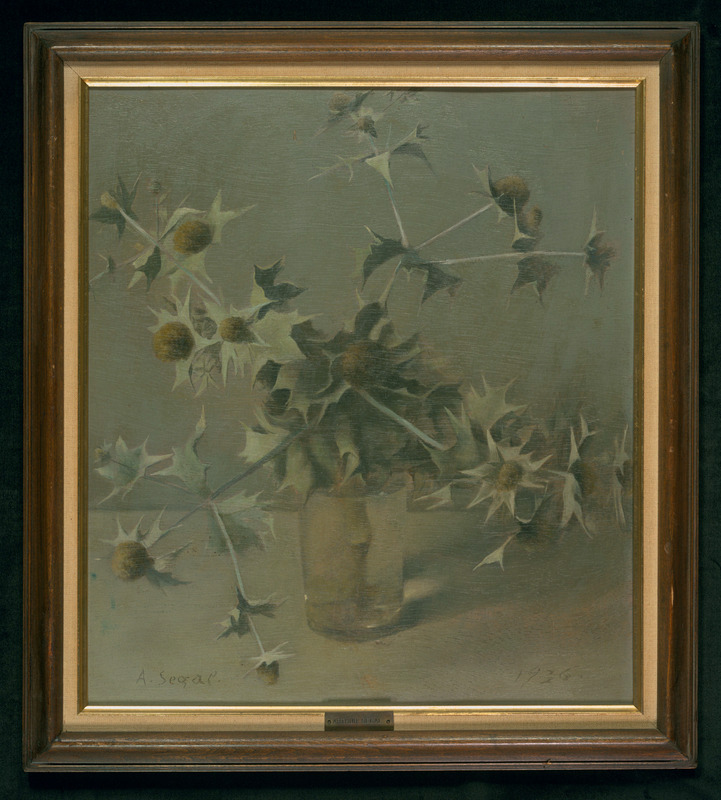 Arthur Segal was born in 1875 in Jassy, Romania He came to Berlin in 1892 to study art. After continuing his studies in Munich with the noted painter Oskar Schlemmer, Segal undertook extensive travels though Italy and France to explore the major art movements of the time - Impressionism, Neo-Impressionism, and Futurism. He was a co-founder of the "Neue Sezession" in Berlin (1910), a group of artists that included Emil Nolde and Karl Schmidt-Rotluff ("Die Bruecke"), whose paintings were rejected by the "Berliner Sezession". after a major exhibit of his work in Zurich in 1920 he returned to Berlin, where he founded his own painting school and became one of the directors of the Novembergruppe, a loose association of artists, musicians and writers.

A follower of impressionism and neo-impressionism at the beginning of his painting career, he approached a more expressionist style from 1910 to 1914, before sympathizing with Dadaism and finding his own style from 1915/16 on. In the late 1920's, Segal became an advocate of naturalism and searched for the objective principles of painting (one of his book manuscripts is called: "The objective principles of painting", 1937). He was a member of the artist-groups "Die Autonomen" and "Die Juryfreien," and served as director of the "Novembergruppe". In 1925 he rejected a teaching position at the New Bauhaus in Dessau.

Besides his work as a painter, a painting teacher and his numerous functions in the artist community, Segal created woodcuts, wrote book-manuscripts, published numerous essays in art-journals and newspapers, and gave lectures on the radio and live for various organizations. Following a ban on exhibiting his art,Arthur Segal left Germany in 1933 and moved to Mallorca, Spain. Later, he emigrated to London and succeeded in opening another painting school. Segal died in London in 1944, survived by his wife and daughter Marianne who continued to direct the school.