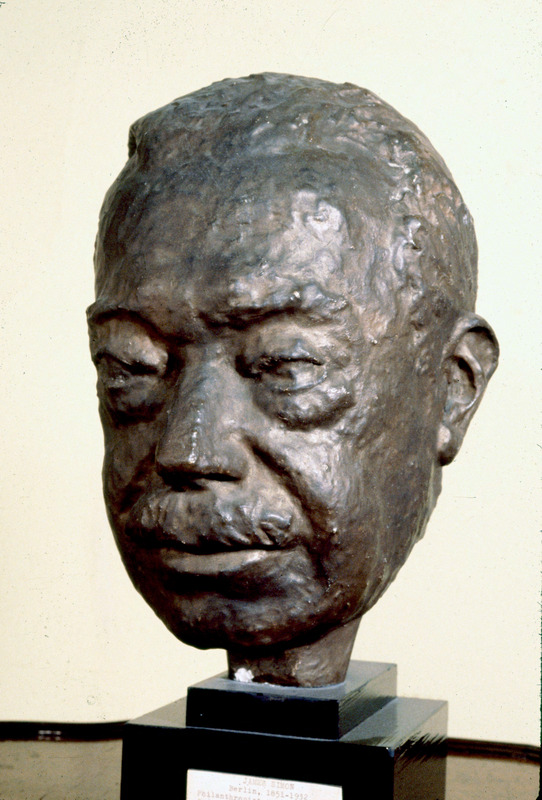 James Simon (1851-1932) was a textile-multimillionaire in Germany, who was a philanthropist (founder of Hilfsverein der Deutschen Juden, 1901) and patron of the arts: he gave a large part of his collection to both, Altes Museum and Neues Museum in Berlin in 1920. Simon financed excavations at Jericho and in Tell-el-Amarna, and he also founded the Deutsche Orient Gesellschaft.

Tina Haim Wentscher (1887-1974) was born in Constantinople, Istanbul into a Turkish-Sephardi Jewish family. Her Yugoslavian father, David Leon Haim worked as a rug-dealer, and her mother, Rebecca Mondolfo was from Italy. Tina spent her earliest childhood in Vienna, before the family settled in Berlin in 1893. Showing artistic prowess even as a child, Tina attended a private art school in Berlin, and she also had the chance to study in Paris in 1912-14, where August Rodin was impressed with her work. She participated in a Berlin Secession show, exhibiting a limestone sculpture of her sister, and soon befriended the artist Käthe Kollwitz. Tina became well known in the Berlin artistic scene for her many portrait busts. Amongst the people she sculpted were the actress Tilly Durieux and Helene Lange. In 1914, Tina married the painter, Julius Wentscher. The director of the Egyptian Museum commissioned her to make a detailed replica of the famous bust of Queen Nefertiti, wife of Pharaoh Akhenaten and other pieces from the Tell Amarna excavations. Tina's replica of the Nefertiti bust was used as the model for all other replicas of the piece. In 1921, Tina Wentscher and her husband took a trip to Greece, Italy and Egypt. She then won a cruise to East Asia and was able to travel with her husband to Java and Bali, where they remained for several years. In 1935, not wishing to return to Germany due to growing anti-Semitism, Tina and her husband remained in the Far East, living in exile for several years and travelling between China, Siam, Cambodia and Malaysia. With the outbreak of World War II, they were deported as "enemy aliens" to Australia in 1940 and were interned until 1942. They then moved to Melbourne and became Australian citizens in 1946. Tina continued to create artistic works in her new homeland for the next 28 years; she died in 1974.