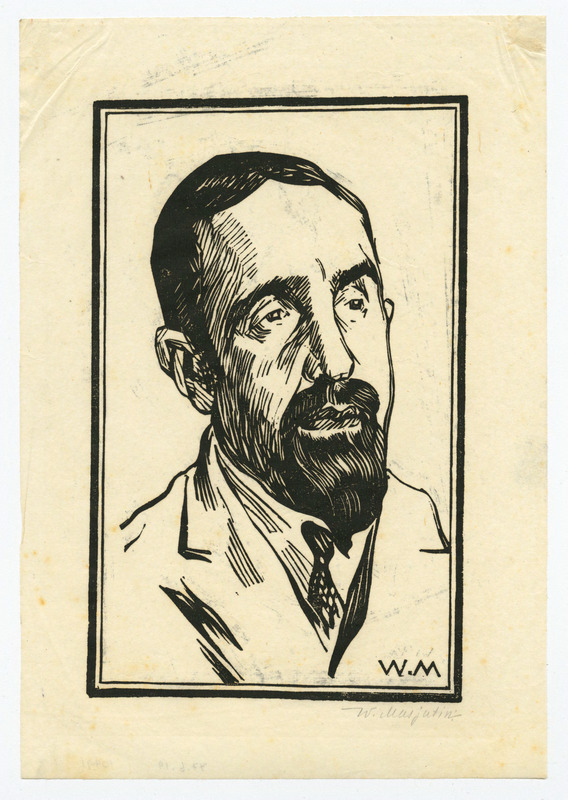 Hermann Struck, born Chaim Aaron ben David (1876-1944) was born and educated in Berlin. He was an early Zionist, traveling to Palestine as early as 1903 and settling in Haifa in 1923. In 1915 he enlisted in the German army and served in Russia, where he produced a large number of prints with subject matter that included: the landscapes of the small towns inhabited by Jews; Jewish character studies and studies of German officers and enlisted men. Struck was best known as an etcher, having written a standard text, Die Kunst des Radierens (The Art of Etching) in 1908, and taught graphic technique to a number of artists, among them Chagall, Lieberman and Corinth. He was also a master at lithography. Struck was an Orthodox Jew, yet held the enlightened view that culture and religion could thrive cooperatively in the Land of Israel. This notion came to fruition upon his immigration to Haifa, where he created an artistic community and participated in the development of the Tel Aviv Museum and Bezalel art school in Jerusalem. He is renowned for his landscapes of the Jewish homeland and small towns in Europe, as well as portraits of many notable and unknown figures.

Wasilly Masyutin was born in 1884 in Riga. He studied in Moscow and became one of the most important Russian printmakers of his generation. His work was heavily marked by symbolism, mysticism and the grotesque and his contemporaries called him the Russian Goya. As a result of the Russian civil war he moved to Berlin in 1921. He worked there prolifically making book illustrations, book cover designs, posters, advertisements and stage designs. He worked and exhibited throughout the second World War. IN 1945 he was arrested by the Russian military under suspicion of collaborating with Ukrainian nationalists and spent a year in Sachsenhausen. He died in Berlin in 1957.