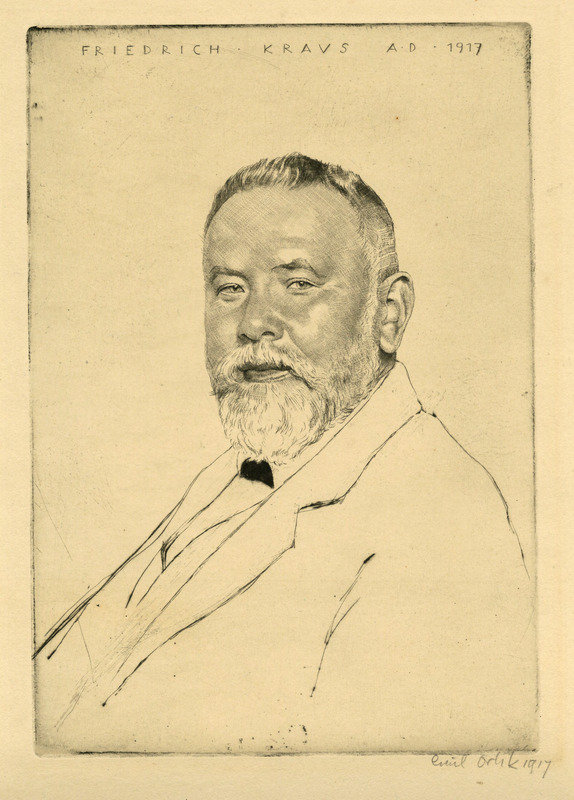 Friedrich Kraus (1858-1936) was a noted Austrian physician (originally from Bohemia). He studied medicine at the German University in Prague, where he subsequently worked as an assistant at Otto Kahler's medical clinic. In 1890 he obtained his habilitation, and not long afterwards was appointed director of the Rudolph-Spital in Vienna. In 1894 he relocated to the University of Graz as a full professor, and in 1902 replaced Carl Gerhardt (1833–1902) as director of the second medical clinic at the Charité Hospital in Berlin. He is remembered for his achievements in the field of electrocardiography and his work in colloid chemistry.

Emil Orlik was born Prague on 21st July 1870 to a German-Jewish family. He studied art in Munich under Heinrich Knirr, Wilhelm Lindenschmidt, and Johann Leonard Raab. He was a painter, an etcher and lithographer, in addition to working as an illustrator for the art magazine PAN, as a theater set designer, book designer and poster designer. He traveled extensively, including a visit to Japan in 1900, where he studied woodblock carving and other techniques. He helped to revive color woodblock printing in Europe. In 1905 Emil Orlik moved to Berlin and took a post at the School for Graphic and Book Art of the Museum of Decorative Arts where he worked until his retirement in 1930. Other notable travels include his trip to Egypt, Nubia, China, Korea, Japan and Siberia in 1911, and his trip to New York City in 1924. Portrait commissions and graphic work kept him busy till the time of his death in Berlin on 28th September 1932.