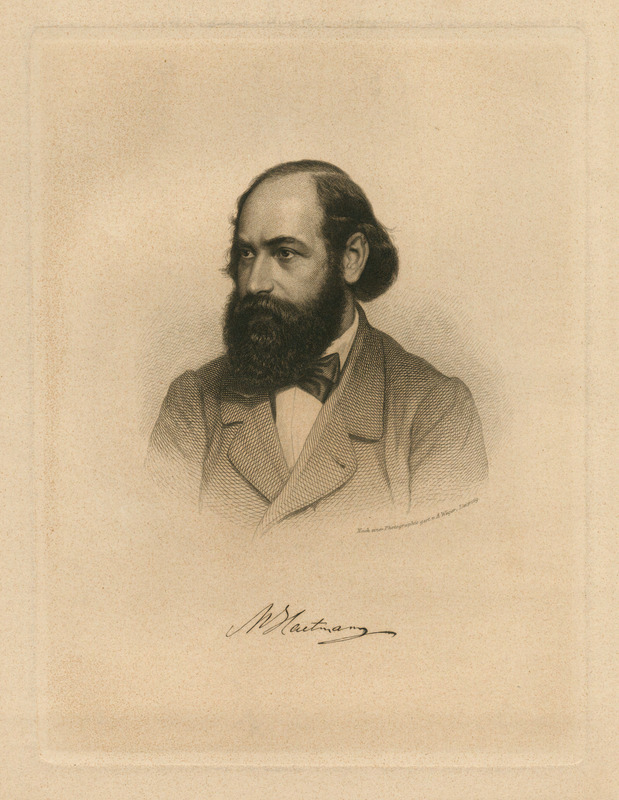 Moritz Hartmann (October 15, 1821 - May 13, 1872) was a German poet and author. Hartmann was born of Jewish parentage at Duschnik in Bohemia. He studied philosophy at Prague and Vienna, traveled throughout Europe. In 1845 he proceeded to Leipzig and there published a volume of patriotic poems, Kelch und Schwert (1845). Fearing prosecution at the hands of the authorities, he moved to France and Belgium. He issued Neuere Gedichte (1846) in Leipzig, returned home and was imprisoned. In 1848 he was elected member for Leitmeritz in the short-lived German parliament at Frankfurt-am-Main. He took part in the revolution of that year in Vienna and escaped to London and Paris. During the Crimean War (1854-56) Hartmann was correspondent of the Kölnische Zeitung, settled in 1860 in Geneva as a teacher of German literature and history, became in 1865 editor of the Freya in Stuttgart and in 1868 a member of the staff of the Neue Freie Presse in Vienna. He died at Oberdöbling, near Vienna, in 1872.