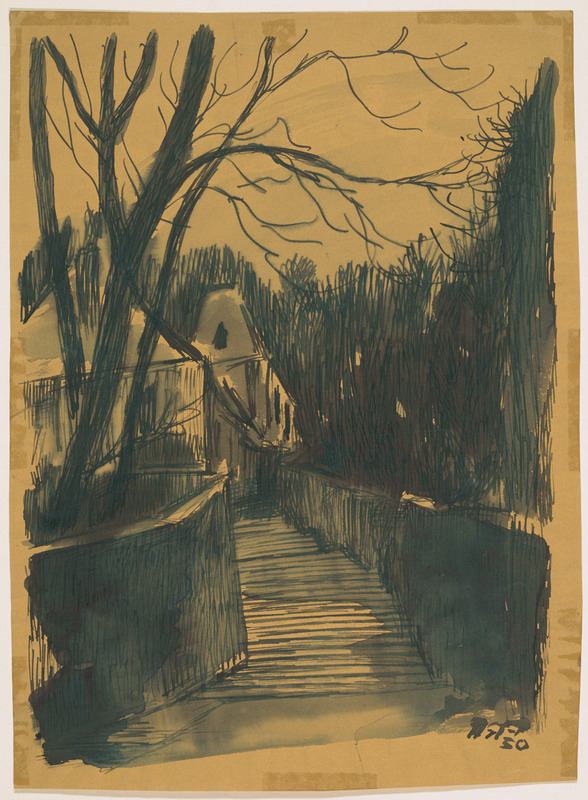 Hugo Steiner-Prag was born Hugo Steiner in Prague on December 12, 1880. He entered the Prague Academy of the Arts in 1897, and in 1900 he enrolled at the Royal Academy of Fine Arts in Munich. He added the name of his native city to his last name to distinguish himself from other artists with the same name. Steiner-Prag transferred to the Lehr- und Versuchsstätte in Munich and later became a teacher there. During this time he worked on the illustration of E.T.A. Hoffmann's 'Die Elixiere des Teufels', the success of which cemented his reputation as an illustrator and book designer. In 1907 he was offered a position as professor at Leipzig's Royal Academy of Graphic Arts and Book Trade. In 1916, Steiner-Prag created twenty-five lithographs for Gustav Meyrink's novel, Der Golem, his masterpiece. Steiner-Prag also became art director of the Propylaeen publishing house in Berlin. In 1933 the Nazis terminated Steiner-Prag's professor position so he returned to Prague. There he established a private school for book arts and graphic design, called the Officina Pragensis. In 1938 he was asked to set up a similar school in Stockholm, which he accepted due to the political situation in Prague. In 1941 he immigrated to the US where he worked as a professor at NYU. In 1943, he mounted a successful exhibition at the New York Public Library. He suffered a heart attack and died on September 10, 1945 in New York City.