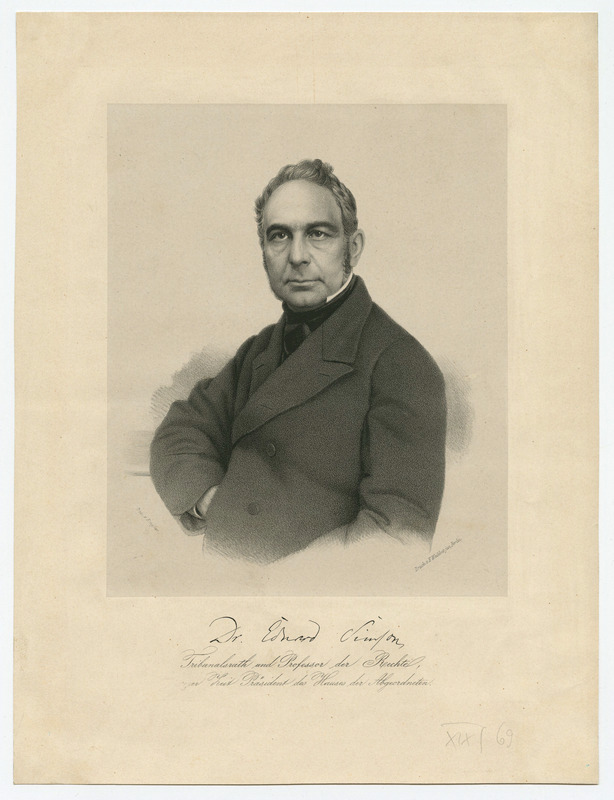 Eduard von Simson was born in Königsberg in 1810. He was raised in an intellectual German Jewish home that converted to Protestantism in 1823. He studied law and became professor of Roman law in 1833. In 1836 he was made judge, and by 1848 had risen to the title of advisor in the higher court. In this year he represented Königsberg in the National Congress at Frankfurt. He became the president of the Congress, and headed the deputation of the Frankfurt parliament to announce to King Frederick William IV his election as German Emperor by the representatives of the people. The king refused the offer and Simson resigned his seat in the Frankfurt parliament in disappointment. In the summer of the same year he was elected deputy for Königsberg in the popular chamber of the Prussian Landtag where he soon made his mark as a great orator. He was also a member of the Erfurt parliament of 1850, and subsequently held other offices of state. In 1879 he was appointed first president of the German Supreme Court at Leipzig. In 1888 Simson received the decoration of the Black Eagle of Prussia and was ennobled. He retired from public life in 1892 and dedicated himself to academic studies and law. He died on the 2nd of May 1899.

Otto Kreyher was born in Landsberg an der Warthe (Gorzów Wielkopolski) in 1836. He studied in 1853 at the Berlin Academy of Art. In 1859 he moved to Breslau where he worked as a portrait painter. He died there in 1905.