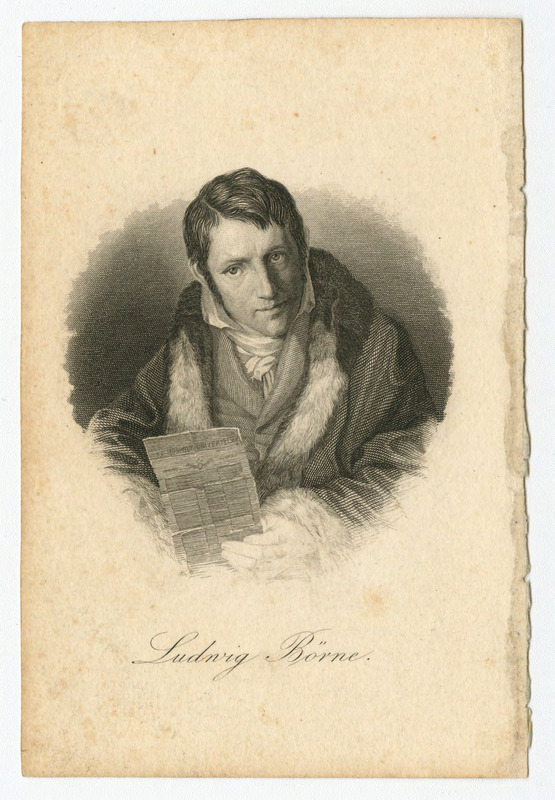 Karl Ludwig Börne was born Loeb Baruch on May 6, 1786, at Frankfurt am Main. He studied medicine and later constitutional law and political science at the universities of Heidelberg and Giessen. On his return to Frankfurt he received (1811) the appointment of police actuary in that city; he had to resign his post due to his ethnicity in 1814. Embittered by the oppression suffered by Jews in Germany, he took to journalism and edited the liberal newspapers ‘Frankfurter Staatsristretto’ and ‘Die Zeitschwingen’. In 1818 he converted to Lutheran Protestantism and changed his name. From 1818 to 1821 he edited ‘Die Wage’, a paper distinguished by its political articles until it was suppressed by police. In 1821 Börne took a pause from journalism and lived in Paris, Hamburg and Frankfurt. In Paris he published ‘La Balance’, a revival of ‘Die Wage’ and ‘Briefe aus Paris’. He died in Paris in 1837.

Moritz Daniel Oppenheim was the foremost Jewish painter of the 19th century in Germany. He was born in Hanau to German-Jewish parents in 1799 and first studied painting under Conrad Westermayr before attending the Munich Academy of Arts. He traveled to Paris to study under Jean-Baptiste Regnault, and then to Rome where he studied with Bertel Thorwaldsen, Barthold Georg Niebuhr, and Johann Friedrich Overbeck. His observations of Jewish ghetto life in Rome served as preparation for later works. In 1825, he settled in Frankfurt am Main. Unlike some of his contemporaries, he chose not to convert to a Christian faith.

Karl Barth was a German engraver, draftsman, and translator born in Eisfeld. He was an apprentice to his father, a goldsmith, in Hildburghausen before studying engraving in Stuttgart under Johannes Muller between 1805 and 1812, while also under the protection of the princes of Thurn and Taxis (a German noble family). He worked and attended the art academy in Munich in 1814. He then spent a few years in Rome, where he befriended the poet Friedrich Rückert. He returned to Germany in 1820 and settled in Hildburghausen. Barth drafted illustrations and worked with Carl Hohnbaum and Friedrich Sickler, as well as with Joseph Meyers for his Bibliographical Institute. He suffered from depression and committed suicide in Kassel in 1853.