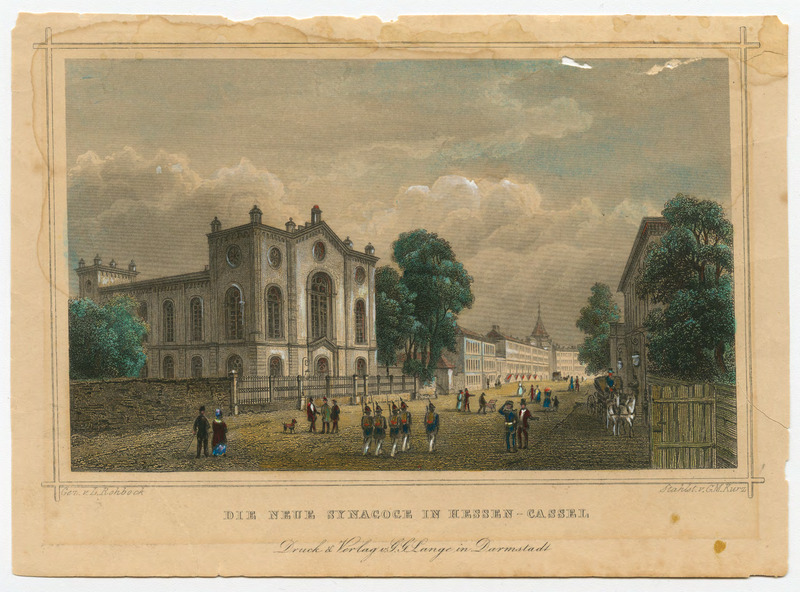 Also known as the Kassel Synagogue, it was inaugurated on the 8th of August, 1839, after an older synagogue had to be abandoned due to structural issues in 1827, and planning had started in 1828. The architect was Albrecht Rosengarten, a Jewish German architect, (1809-1893), who at that time was still a student. It was the first synagogue in Germany to be built in the Romanesque revival Rundbogenstil, a style used widely in Germany and characterized by heavy use of romanesque arches. The Jewish community of Kassel wanted a building that would be prominent, but also in harmony with the existing architecture of the city. Rundbogenstil was considered a national German style, and thus the new synagogue was a symbol of Jewish assimilation in German society. Many more synagogues in Germany (and in German Jewish communities abroad) would be built in this style. During 'Kristallnacht' around the 10th of November, 1938, the synagogue was destroyed systematically. First the Torah and other easily removable items were stripped from the synagogue and destroyed, then followed by larger objects, and on the 11th of November 1938, the city government tore down the empty, but still functioning building, and turned the lot into a parking lot. After the war, several new synagogues were built on the old location.

Ludwig Rohbock was a German landscape and architectural draftsman and steel engraver.

Albrecht Rosengarten was born to a Jewish family in Kassel in 1810. In the 1830's be began working for the city's building and planning department. He learned the craft of architecture on the job and in study trips to Paris in 1839 (where he studied under Henri Labrouste) and Rome in 1841. He was the first German Jewish architect and the first to design synagogues, primarily in Rundbogenstil. He later moved to Hamburg, where he built several buildings including the Kohlhöfen Synagogue. He died in Hamburg in 1893.