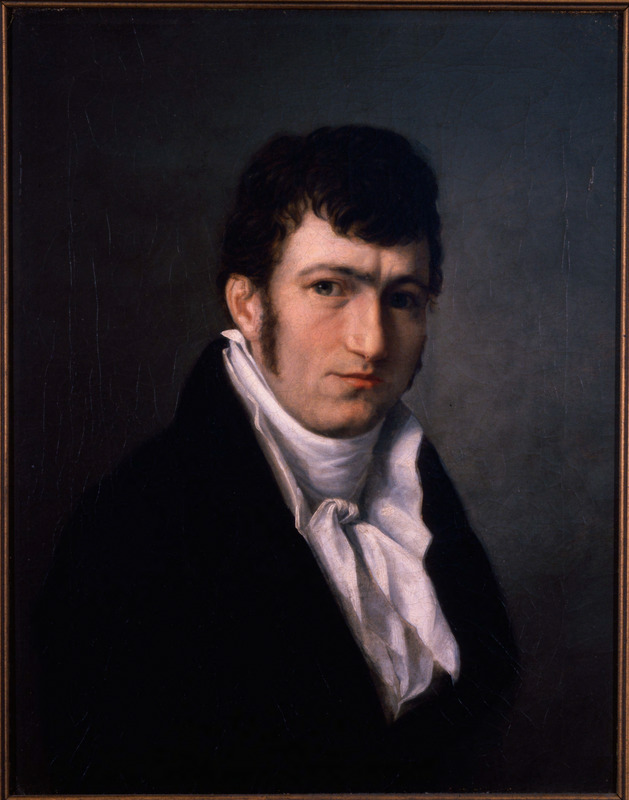 WOLF ZACHARIAS WERTHEIMER (1782-1844) was a banker and a descendent of the prominent Viennese banking family Wertheimer. One of his ancestors was the Imperial Court Agent Samson Wertheimer (1658 –1724). In 1769 Wolf Zacharias Wertheimer's parents Zacharias Isaac Wertheimer (1744-1809) and Frommet Speyer (1755-1826) settled permanently in Frankfurt am Main where they lived in the house Roter Turm. Wolf Zacharias Wertheimer and his wife, his cousin Eleanora (Lea) Wertheimer, married in 1803, they had 14 children. He died on October 17, 1844 in Frankfurt am Main and was buried at the Jewish cemetery in the Rat-Beil-Strasse, Feld 1.

MORITZ DANIEL OPPENHEIM (1799–1882), German-Jewish painter. His life reflects the new possibilities opened up to Jews by the emancipation. Born in the Hanau ghetto, near Frankfurt, he was raised in a strictly Orthodox home, but his parents had no objections to their son's artistic aspirations. Oppenheim received his art training in Hanau, Frankfurt, Munich and Paris. From 1821 to 1825 Oppenheim lived in Rome, then the European art center. There he came under the influence of the Nazarenes, a group of Christian artists who painted New Testament scenes. Having obtained the patronage of Adolph Rothschild on a trip to Naples in 1823, Oppenheim's career was launched. After his return to Frankfurt, his clientele included the five Rothschild brothers and, through Goethe, the protection of the Grand Duke of Saxe-Weimar. He was soon known as "painter of the Rothschilds" and – on account of his financial success – as "the Rothschild of the painters." He earned praise from Goethe to whom he sent two drawings based on Goethe's Hermann und Dorothea. Goethe, whom Oppenheim visited in Weimar and whose portrait he painted, persuaded the grand duke of Weimar to bestow upon the painter the title of honorary professor. In 1833 a picture with the narrative title "Return of a Jewish Volunteer from the Wars of Liberation to his Family Still Living According to the Old Tradition" brought the artist further renown.

Oppenheim's paintings of Old and New Testament scenes as well as his numerous portraits, pencil sketches as well as oils, were soon widely appreciated. His fame later in life was based on his cyclus "Bilder aus dem altjüdischen Familienleben" [Scenes of Traditional Jewish Family Life] (1865) which appeared in the United States as "Family Scenes from Jewish Life of Former Days" (1866). They were popular in reproductions all over Europe. His career marks a significant turning point in the modern history of Jewish artists. Moritz Oppenheim became the first Jewish painter to receive classical artistic training and exposure to modern artistic movements. He was also the first to gain official recognition from the non-Jewish world while remaining an observant Jew throughout his life.