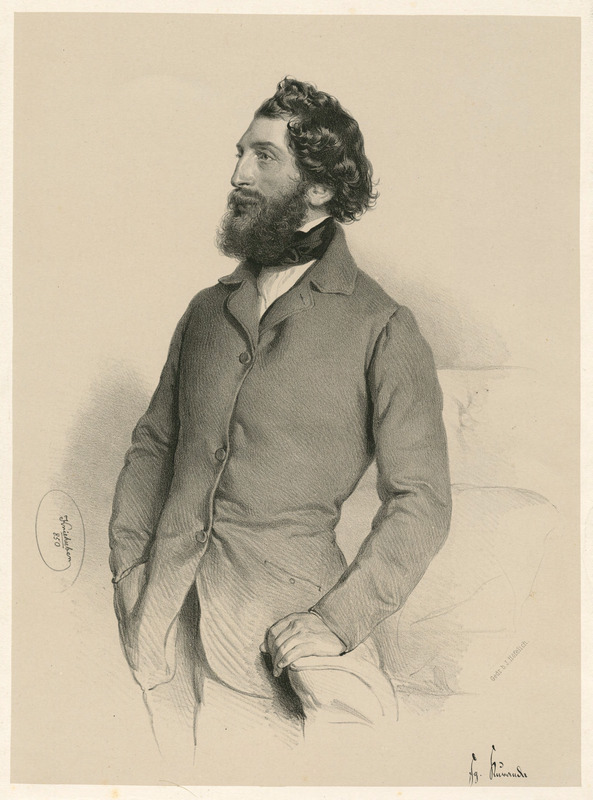 Ignaz Kuranda (May 1, 1812, Prague - April 3, 1884, Vienna) was an Austrian deputy and political writer. He was born in Prague, to a family of Jewish book sellers. In 1838, Ignaz Kuranda went to Stuttgart, originally intended as an excursion to further his literary skills, but he was exposed there to public life, and he began thinking about become a representative of the people. Thereafter he went to Paris and Brussels, where he wrote articles about German literature, which was followed in 1841, by the creation of the newspaper, “Die Grenzboten”, which was published in Leipzig, due to pressure put on the paper by Prussian and Austrian censors. In 1848, he was a member of the Frankfurt parliament, but left, disgusted by the slow rate of action. He then went back to Austria where he campaigned for the reinstitution of constitutional rule. On March 20th 1861, he was elected to the Landtag (lower level assembly) of Lower Austria, which allowed him to take a position in the Reichsrat (parliament) shortly thereafter. Due to his tremendous oratorical skills, he was given the Ritterkruez des Leopoldordens, by the emperor in 1867, and in 1881, he was made an honorary citizen of Vienna. Furthermore as a member of the parliament he worked to further the study of Jewish science and history, but was unable to influence Jewish policy before his death on the 3rd of April, 1884, in Vienna.

Josef Kriehuber (1800-1876) was a Viennese lithographer and painter. He created over 3000 lithograph portraits of many prominent Viennese individuals of his day. In 1860 he became the first artist awarded the Franz Joseph Order in Austria. But as photography became more popular his commissions dwindled and he spent his last years in poverty. He died on May 30, 1876, in Vienna.