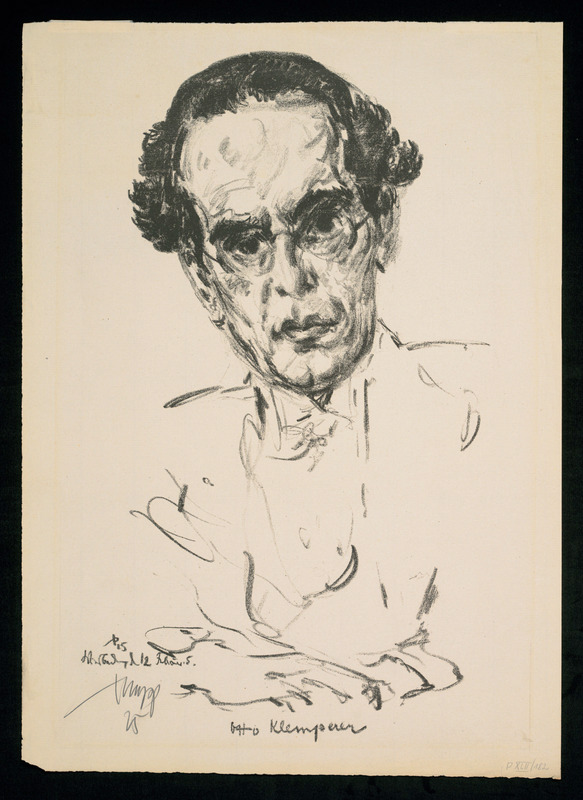 Otto Klemperer, "the last of the few really great conductors of his generation" was born in Breslau in 1885. He studied in Frankfurt and Berlin, and in 1905 he met Gustav Mahler, who supported Klemperer’s career. He held positions in Hamburg; Barmen; Strasbourg; Cologne; Wiesbaden; and Berlin. Klemperer escaped Nazi Germany in 1935, emigrating two years later to California, where he became music director of the Los Angeles Philharmonic Orchestra. In 1940, Klemperer became a US citizen, but after the war he encountered difficulties with the State Department and the FBI because of his politically left-leaning views; consequently, he returned to Europe, where he worked mainly in England with the Philharmonia of London and other orchestras. In 1970 he conducted in Jerusalem and was awarded an Israeli honorary passport. Otto Klemperer died in Zurich in 1973.

The artist Emil Stumpp was born in Neckarzimmern, Germany in 1886. After serving in World War I, he studied art and humanities before pursuing a career in art, reaching some fame for his portraits of well-known people. In 1933, Stumpp was commissioned for a portrait of Adolf Hitler on occasion of his birthday, but when it was declared unflattering, Stumpp was professionally disqualified. He was arrested and sentenced to one year in prison. Emil Stumpp died in Stuhm (Sztum, Poland) in 1941.