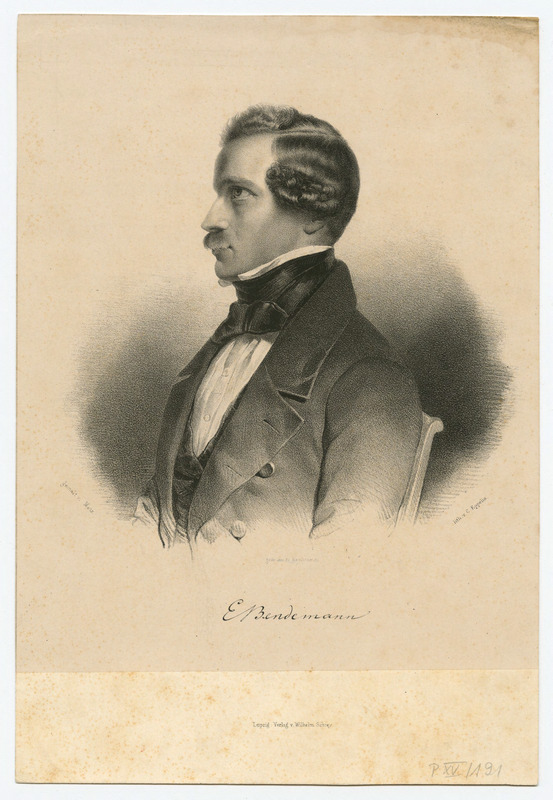 Eduard Julius Friedrich Bendemann (1811-1889) was born in Berlin to Jewish parents who converted to Christianity. He studied at the University of Art in Berlin under Wilhelm von Schadow and attended the Düsseldorf Art Academy. He traveled to Italy and France over a number of years but settled in Düsseldorf, working as a freelance painter. Bendemann taught at Academy of Fine Arts in Dresden and then served at the director of the Düsseldorf Art Academy for a number of years before resigning due to health-related issues.

Gustav Ferdinand Metz was a draftsman, illustrator, painter, and sculptor. Born in 1817 in Brandenburg, Germany. In 1835, he began attending the Academy of Art in Berlin, studying under Ernst Rietschel. The following year, he entered a sculpture competition. Though he did not win, he gained some notariety. He became known for his etchings and sculptures, especially his bust and bas-relief works. Upon moving to London, he switched his focus to portrait painting. He died in 1853.

Carl Eppelin was born in 1816 in Staffelstein. He was a printmaker mainly active in Gotha, Germany. He died in Wiesbadem in 1885.

Franz Seraph Hanfstaengl was a German painter, lithographer and photographer. He studied lithography at the Royal Academy of Fine Arts in Munich from 1819 to 1825, after which he produced portrait lithographs of notable figures, earning him the moniker "Count Litho." In 1833, he established his own lithgraphy studio, which operated until 1868. A fine art print shop and photography workshop were eventually added. Later in his career, he pursued portrait photography and served as court photographer.