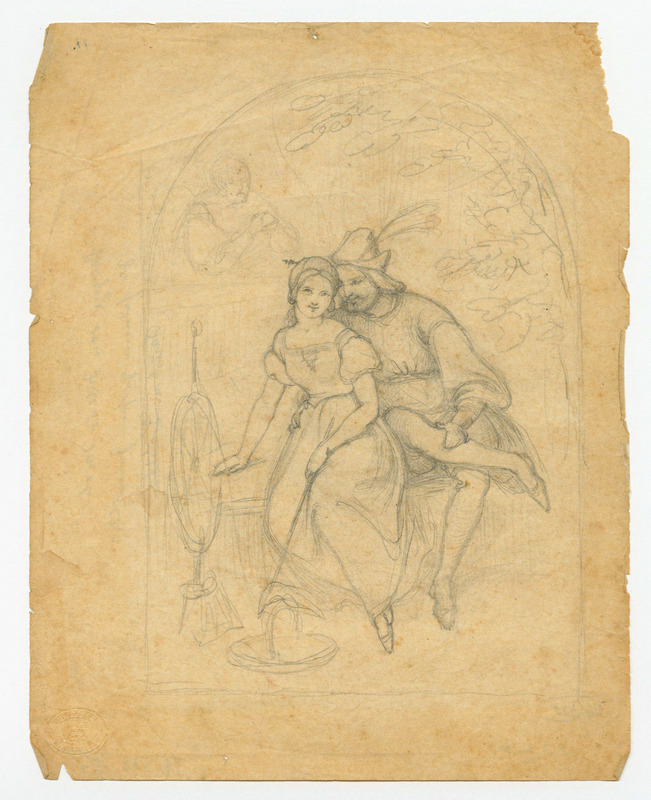 Faust is the protagonist of a classic German legend, based on the historical alchemist and astrologer, Johann Georg Faust (c. 1480–1540). In the drama “Faust” by Goethe, the devil Mephistopheles helps Faust seduce the beautiful young woman, Gretchen.

Julius Jacob was a German landscape and portrait painter. He was born Isaac Jacob in Berlin April 25, 1811 and died there October 20, 1882. He studied under Wach at the Düsseldorf Kunstakademie, and under Delaroche in Paris. Upon completing his studies he traveled through Europe, North Africa, and Asia Minor, returning with more than 1000 landscape studies and over 300 copies of portrait paintings from foreign art galleries. From 1844 to 1855, Jacob lived in London; he then visited Vienna, where he painted the portraits of several prominent men, including the princes Metternich, Schwarzenberg, Liechtenstein, and Lobkowitz, and Count Kinsky. Some of his most important paintings: "Steinfeld von Sorrent" and "Aus der Mark" (exhibited in Berlin, 1876); "Verstossung aus dem Paradies"; "Scene aus der Frithjofssage"; "Künstlerleben"; and "Scenen aus der Geschichte St. Ludwigs." Jacob was awarded gold medals by the academies of arts in Paris, Lyons, and Rouen, and became an honorary member of several academies throughout Europe.