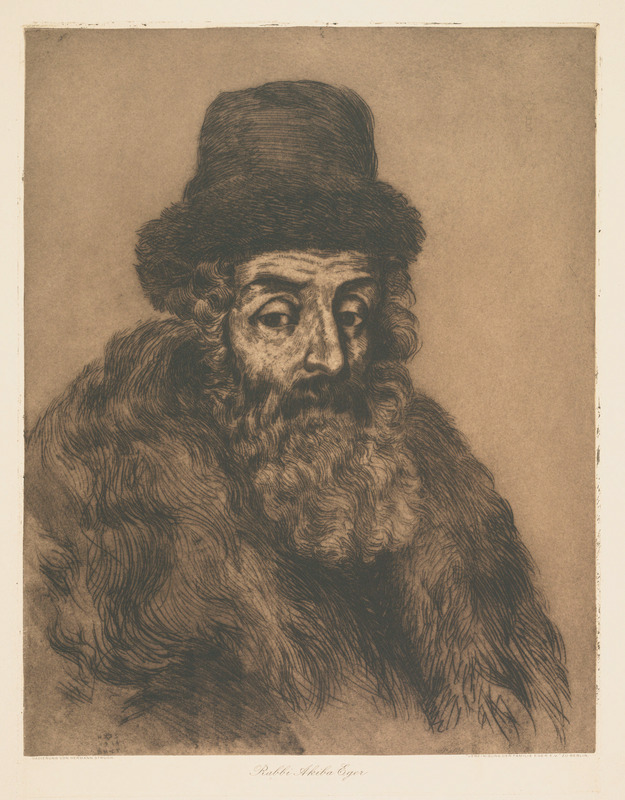 Akiva Eger was born in Kismarton, Hungary (Eisenstadt, Burgenland Austria). He was educated at the Mattersdorf yeshiva and later by his uncle, Rabbi Wolf Eger, (1756-1795), at the Breslau (Wrocław) yeshiva. He was the rabbi of Märkisch Friedland, West Prussia, from 1791 until 1815; then for the last twenty two years of his life, he was the rabbi of the city of Posen (Poznań). He was a rigorous casuist of the old school, and his chief works were legal notes and responsa on the Talmud and the Shulkhan Arukh. He believed that religious education was enough, and thus opposed the party which favored secular schools. He was a determined foe of the Reform movement, which began to make itself felt in his time. He died in Posen in 1837.

Struck was a master of etching and book illustration. HE taught the art of printmaking to Marc Chagall, Max Liebermann and Arno Nadel and his monograph on the art of etching is a classic in the field. Struck was both an Orthodox Jew and a Zionist, however, his outlook on the world was decidedly cosmopolitan. This is also evident in his countless portraits, from Friedrich Nietzsche to Sigmund Freud, and impressions from his wide travels. While on service in the German Army during WW 1 he came into contact with the Jewish Communities of Galicia and Lithuania. During this time he created a series of sketches in Eastern Europe, which he lated turned into a book together with Arnold Zweig, titled "The Face of East European Jewry". In 1923 he emigrated to Palestine, where he taught ar Bezalel School in Jerusalem.