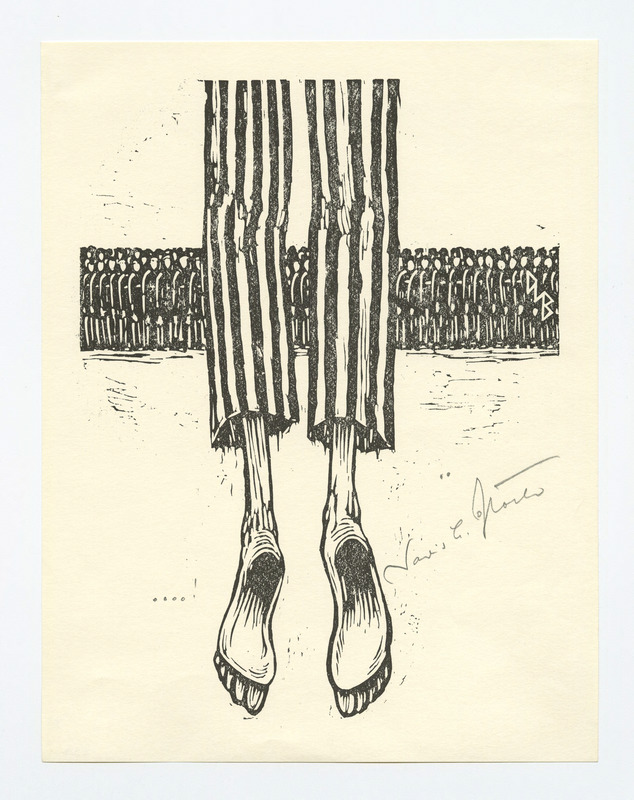 Born in 1910 in Floss, Bavaria, David Ludwig Bloch lost his hearing as a child. At age 5 he came to Munich to the national institute for the deaf and mute. Subsequently, he attended a private school for the deaf in Jena. He began to study porcelain painting in 1925, and was employed at this until 1934, when he became unemployed. He then began studies at the state school for applied painting in Munich. By this time the artist had already taken part in exhibitions of the "Jewish Culture Federation of Bavaria". Bloch became a commercial artist and decorator with the department store Sallinger in Straubing, but subsequently was fired for being Jewish. He was excluded from studies in Munich for the same reason. During Kristallnacht Bloch was arrested and was in Dachau for 4 weeks, after which he found work with the master painter Heinz Voges in Munich. On 3 April 1940 the artist emigrated to Shanghai. There he married deaf Lilly Cheng Disiu and worked among other things in inks and water colors. He moved to New York in 1949, and worked there for 26 years as a graphic artist. He visited Germany in 1976 for the first time after 1940, and after that visit, the Holocaust became an intense focus of his art.

A book published in 1997, titled "David Ludwig Bloch: Woodcuts. Shanghai 1940-1949," is trilingual (written in English, German and Chinese) and presents Bloch's collected woodcuts created in the years of his exile in Shanghai (which had become a refuge for some 20,000 European Jews). Bloch created a rich oeuvre of more than three hundred woodcuts, which bear witness to his meticulous and affectionate observance of his Chinese surroundings and the daily life of lower class people in Chinese society. He received the Cultur prize from the Deutsche Gehoerlosen Bund in 1997. In 1999, he had an exhibition of his works at the Jewish Museum in Fuerth, Germany, another "Flight and Rescue in Shanghai, 1938-1949," at the United States Holocaust Memorial Museum in Washington, DC, 2000, and a one-man restrospective at the Jewish Museum in Munich, Germany, 2000. That show celebrated the occasion of Bloch's 90th birthday.