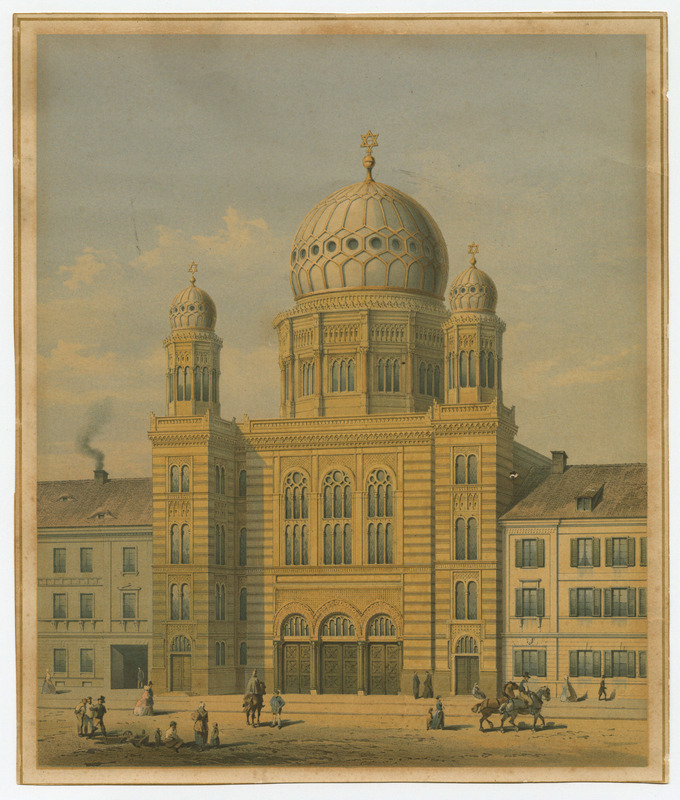 The New Synagogue in Berlin was built between 1855 and 1866. It was designed by Eduard Knoblauch and Friedrich August Stüler in neo-moorish style, resembling elements of the Alahambra in Spain. It was built to house a growing Jewish population in Berlin, and it was the largest Synagogue in Germany in its time, seating over 3,000 people. The Synagogue was attacked on Kristallnacht, by a mob that desecrated Torah scrolls, and lit a fire in the middle of the building. The destruction of the Synagogue was halted by a police officer, Otto Bellgardt, who stated to the mob that due to the buildings landmark status, they would be dispersed. The officer’s actions allowed the fire department to get to the fire and extinguish it. The Jewish community continued using the building, even as parts of the building were sized to be used as uniform depots, and the ndamaged by bombing. The position of the building in the eastern part of Berlin kept the synagogue from being renovated until the fall of the wall. In 1993 the restored Synagogue was re-opened.

Eduard Knoblauch was a German architect. Born in Berlin in 1801 to a family of silk manufacturers. He studied at the Berlin Academy of Architecture under Karl Friedrich Schinkel. In 1824, he co-founded the Architects Association of Berlin, serving on the excutive board until 1862. After completing his studies and examinations, he traveled around Germany and Holland and then to France, Switzerland, and Italy in 1829 and 1830 with Friedrich August Stüler and Woldemar Hermann. Upon his return to Berlin, he became the first architect to open his own private firm. A year later he married Julie Verhuven. Knoblauch also edited for a number serial publications devoted to architecture. He was commissioned to design the New Synagogue in Berlin, but in 1863 he fell ill and died two years later. Friedrich August Stüler took the reigns and completed the project.

Wilhelm Loeillot (ca. 1827-1876) was a German draftsman, lithographer and publisher, active between 1840 and 1876 in Berlin. He illustrated and published numerous works related to architecture.