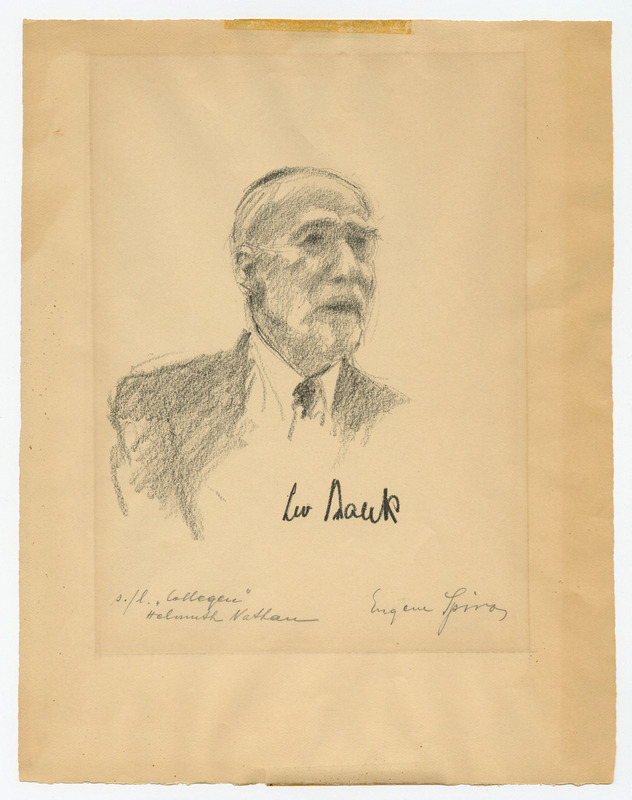 Leo Baeck was born in Lissa (now Leszno, Poland) in 1873, the son of Rabbi Samuel Baeck and Eva née Placzek. From 1891 to 1894, Baeck was in Breslau (now Wroclaw, Poland), studying at the Jewish Theological Seminary as well as at the University. He continued his studies in Berlin at the Lehranstalt für die Wissenschaft des Judentums. By 1897 he had secured his first post as rabbi in Oppeln (now Opole, Poland). He married Natalie Hamburger in 1899, moving to Düsseldorf in 1907 and then to Berlin in 1912. There, he worked both as a rabbi at the synagogue on Fasanenstraße as well as a lecturer at the Hochschule für die Wissenschaft des Judentums. During World War I, Baeck served as a chaplain in the German Army on the east and west fronts. During the 1920s he became involved in the work of several Jewish organizations. When the Nazis rose to power in 1933, Baeck was elected president of the Reichsvertretung der deutschen Juden (renamed the Reichsvertretung der Juden in Deutschland in 1935). In 1943, Baeck and his family were deported to the concentration camp at Theresienstadt, where he continued to teach in secret. After the camp was liberated by the Red Army in May 1945, he joined his daughter, Ruth, in England. Leo Baeck died in 1956.

Eugene Spiro is well recognized for his landscapes, life sketches, and portraits, particularly of famous conductors and musicians). He was a member of both the Munich and Berlin Secessions. Spiro was born in Breslau, Germany (now Wroclaw, Poland) in 1874, the son of a synagogue cantor. He studied art both in Breslau (under Albrecht Bräuer), Munich (under Franz von Stuck), and also in Italy. He was also briefly married to the actress Tilla Durieux in 1904. After an extended stay in Berlin from 1906-1914, Spiro settled in Paris, where he belonged to a group of artists meeting at the Café du D"me. He received a professorship at the Académie Moderne, was elected to the Académie Des Beaux-Arts and co-founded the Salon d'Automne. The outbreak of WW I forced him to return to Germany, where he soon became a popular portrait painter. From 1915 to 1933 Spiro was on the executive board of the Berlin Secession and a professor at the Staatliche Kunstschule. The Nazi takeover forced Spiro into emigration. The sixty-one-year old went to Paris in 1935, where he founded the Union Des Artistes Libres in 1936. He met his wife Lily Jacoby at a French internment camp in Gurs during this time. After the German occupation of France in 1940, Spiro and his wife emigrated to America and then to New York in 1941. Spiro worked as a teacher of the Wayman Adams School in Elizabethtown, New York and at Dartmouth College. He participated in exhibits in the United States for the rest of his life and died in New York in 1972.