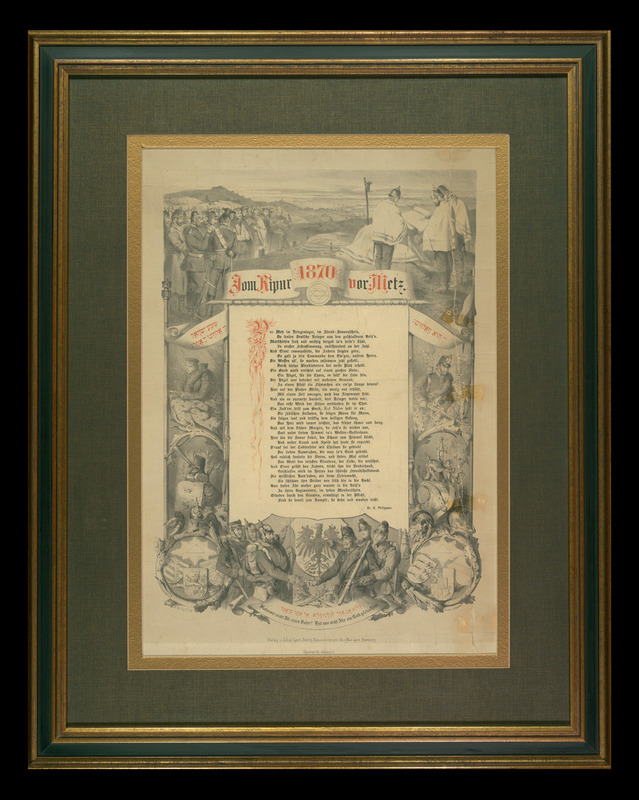 The Siege of Metz, which lasted between September 3 and October 23, 1870, was a crushing defeat for the French army during the Franco-Prussian War (1870/71). After being defeated at the Battle of Gravelotte, Marshal Bazaine retreated into the defenses of Metz. There, he was besieged by the Prussian Second Army lead by Prince Friedrich Karl on September 3. The French attempted to break the siege first at Noiseville and again at Bellevue but failed each time. Although no call for help was made, the French Army of Châlons under the commanded of Marshal Mac-Mahon was nevertheless ordered to reinforce Bazaine. Marching to Metz, the Army of Châlons was trapped and destroyed at the Battle of Sedan. Bazaine was forced to surrender his entire army on October 23, 1870. Prince Friedrich Karl and the Prussian Second Army were now free to move against the French force in the Loire River area.

Wilhelm Loeillot (ca. 1827-1876) was a German draftsman, lithographer and publisher, active between 1840 and 1876 in Berlin. He illustrated and published numerous works related to architecture.

Ludwig Burger was born in Krakow in 1825. He dabbled in lithography before formaly studying at the Berlin Art Academy, meanwhile illustrating books. For a brief time he worked in the studio of Karl Wilhelm Kolbe the Younger, and then spent a year as a draftsman for a playing car factory in 1846. He then embarked abroad in 1852 to Antwerp and then Paris, where he studied under Thomas Couture. He is best known for his drawings and print, though he pursued decorative work (such as painting and designs for glass windows) beginning in 1869. In 1872, he travelled to Italy to study Renaissance designs. Burger died in Berlin in 1884.