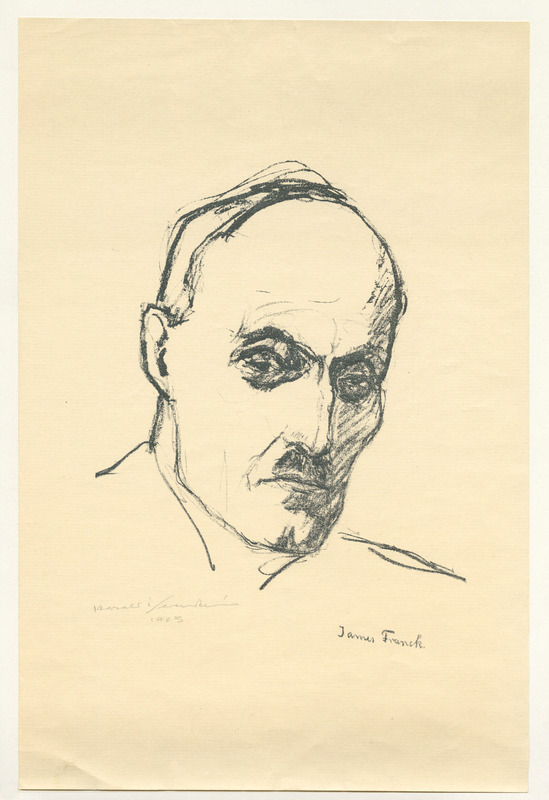 James Franck (26 August 1882 – 21 May 1964) was a German Jewish physicist and Nobel laureate. In 1925, Franck received the Nobel Prize in Physics, mostly for his work from 1912 to 1914, which included the Franck-Hertz experiment, an important confirmation of the Bohr model of the atom. In 1933, after the Nazis came to power, Franck left his post in Germany. He immigrated to the United States where he became involved in the Manhattan Project. Part of his work there involved the compilation of the Franck Report, finished on 11 June 1945, which recommended not to use the atomic bomb on Japanese cities.

Harald Isenstein was a German-Jewish artist, best known for his sculptural busts of prominent personalities. Born in Hannover on August 13, 1898, he studied at the Academy of Arts in Berlin, before co-founding and teaching at the private Jewish Reimann School of Art. He also co-founded the Volks-Kunstschule in 1925. As a professional sculptor, he produced the bust of Albert Einstein in front of the Einstein Tower in Potsdam. In 1934 he emigrated to Denmark, then moved to Sweden in 1943, before settling in Copenhagen in 1946. Isenstein died in Copenhagen on February 3, 1980. Most of his works can be found at the Museum of Korsør in Denmark.