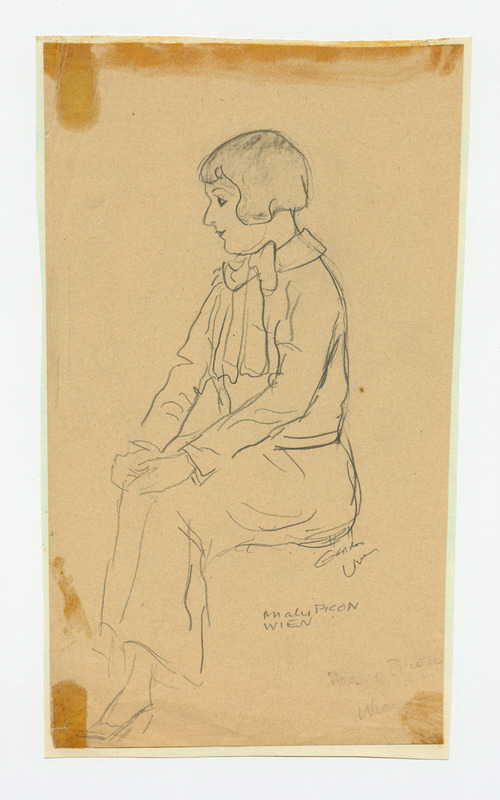 Molly Picon (1898-1992) was an American actress and author. She began her stage career as a child in the Yiddish Theatre, and continued to adulthood. In the 1920s she began acting in silent films, boosting her to fame. She later appeared on various radio and television shows. Picon first made her English language stage debut in 1940 and starred in a number of musicals. She died of Alzheimer's disease in 1992.

Emery I. Gondor (1890-1977) was a caricaturist, illustrator, child psychologist and photographer. Born in Budapest, Hungary, he attended the Royal Hungarian University and received his diploma from the National Academy of Art. He became interested in child psycholgy after noting the affect of World War I on his art students. He also illustrated children's books and newspapers during this time. Gondor immigrated to the United States in 1935 and became a citizen in 1941. During World War II, he worked for the War Department and was Chief of the Technical Operation Unit in the Overseas Service for France and Germany for two years.After the war, Gondor was named head of the art and play therapy groups at the Retarded Children's Clinic and the Psychiatric Child Guidance Clinic at New York Medical College. In addition, he wrote and illustrated several books, created puzzles for dozens of comic books, and taught art to juvenile delinquents at Youth House. In 1959, Gondor received his diploma in Clinical Psychology from New York State University. He became director of the art program at the Institute for Mental Retardation at New York Medical College in 1968. Emery Gondor died in 1977.