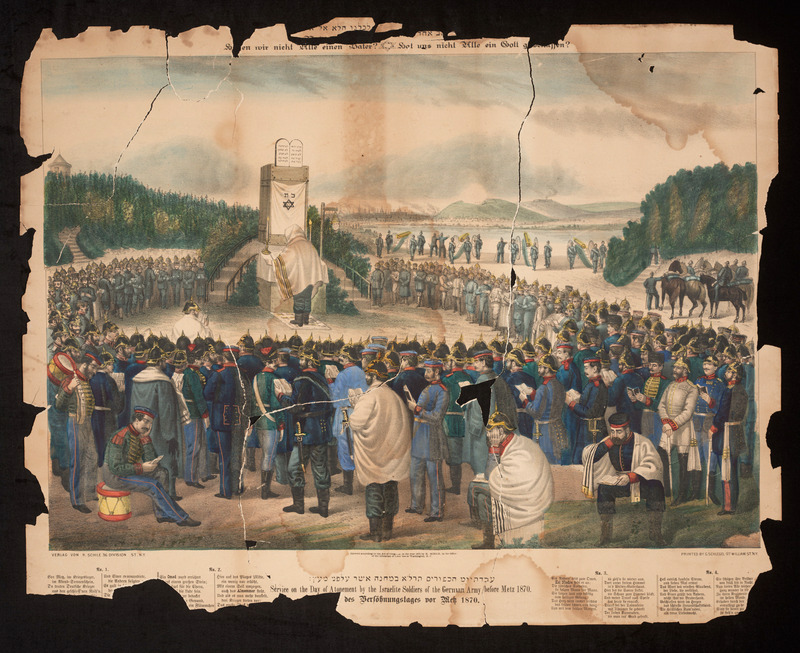 Print that commemorates the Yom Kippur service of Jewish soldiers in the German Army during the siege of the Fortress of Metz, 1870. The Siege of Metz lasting from September 3, – October 23, 1870 was a crushing defeat for the French army during the Franco-Prussian War (1870/71). After being defeated at the Battle of Gravelotte, Marshal Bazaine retreated into the defenses of Metz. There he was besieged by the Prussian Second Army lead by Prince Friedrich Karl on September 3. The French attempted to break the siege first at Noiseville and again at Bellevue but were repulsed each time. Although no call for help was made, the French Army of Châlons under the commanded of Marshal Mac-Mahon was nevertheless ordered to reinforce Bazaine. Marching to Metz, the Army of Châlons was trapped and destroyed at the Battle of Sedan. Bazaine was forced to surrender his entire army on October 23, 1870. Prince Friedrich Karl and the Prussian Second Army were now free to move against the French force in the Loire River area.

Unknown Artist: Service on the Day of Atonement by the Israelite Soldiers of the German Army / before Metz 1870, Leo Baeck Institute, 2018.19.