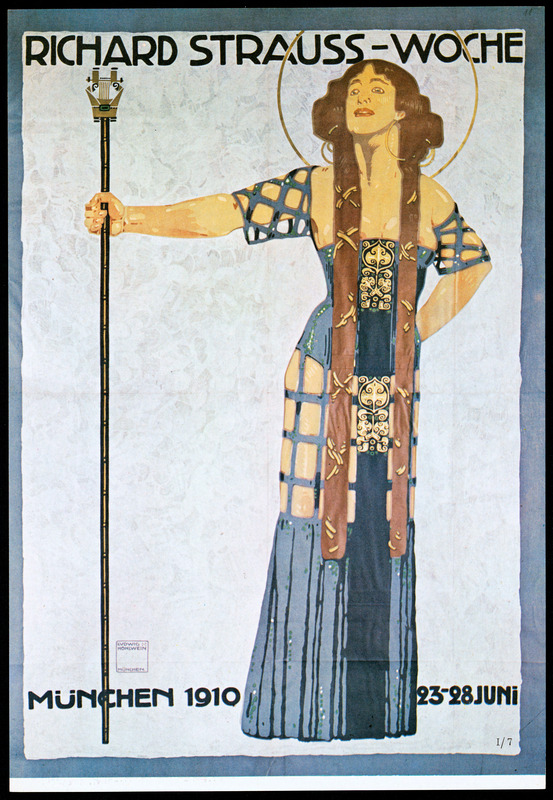 The artist of the poster, Ludwig Hohlwein (1874-1949), had trained as an architect in Munich before becoming a commercial poster designer in Berlin. He was famous for working in the "Sachplakat" style of design, known for its simple yet bold designs, with minimal text and flat color choices. Hohlwein became a member of the Nazi party and designed propogandistic posters under the supervision of Joseph Goebbels and the Ministry of Propoganda.

The conductor and composer Richard Strauss is remembered as a successor of Richard Wagner and together with Gustav Mahler as a representative of late German Romanticism. Born in Munich in 1864, he started his musical career as a pianist in Vienna in 1882, and eventually he became a widely acclaimed conductor, serving at the German National Theater in Weimar; the Bavarian State Opera; the Vienna State Opera; and repeatedly at the (Richard Wagner) Bayreuth Festival. He also was a co-founder of the Salzburg Festival in 1920. His operas include – among others – “Salome” (1905); “Elektra” (1909); “Der Rosenkavalier” (1911); “Ariadne auf Naxos” (1912); “Die Frau ohne Schatten” (1919); “Die ägyptische Helena” (1928); and “Die schweigsame Frau” (1935). Throughout the Nazi era, Strauss somewhat cooperated with German authorities, but he also protected Jewish family members, and he worked with Jewish librettists. Richard Strauss died in Garmisch-Partenkirchen in 1949.