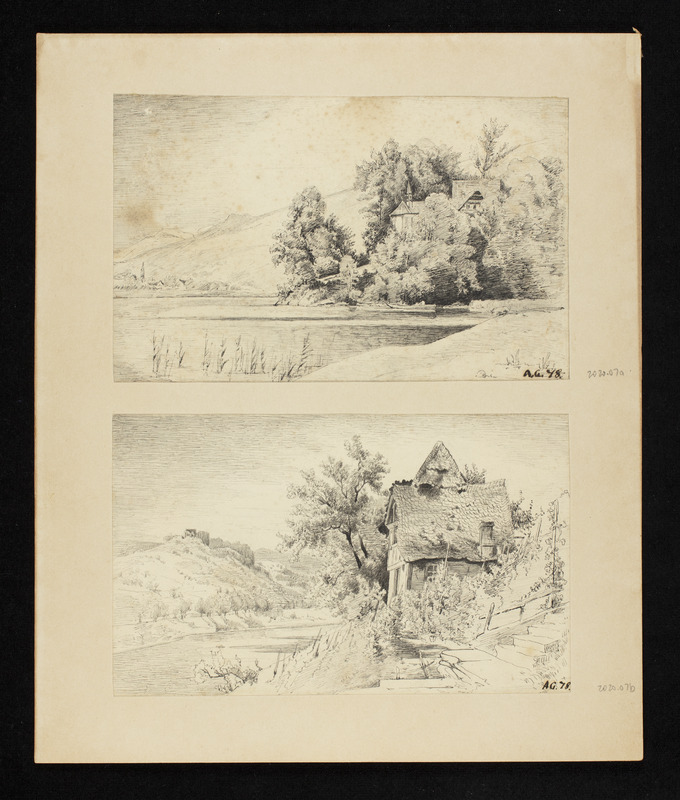 The presumed artist of this painting is Adolph Goldschmidt, who was the uncle of Hertha Solmitz (née Goldschmidt).

Adoldph Goldschmidt was a well regarded art historian, specializing in the Medieval era, and an influential teacher. Born in Hamburg into a Jewish banking family, his father was Martin (1823-1903) and his mother was Louise Arnold (1839-1919). Goldschmidt started training in his father's office for a career in banking, but his passion was art. Goldschmidt studied art history at the universities in Jena, Kiel, and Leipzig. He took his degree in 1889 with the dissertation "Lübecker Malerei und Plastik bis 1530," the first detailed analysis of the medieval art of northeast Germany. After traveling through Germany, Denmark, Sweden, the Netherlands, England, France, and Italy, on the presentation of his work "Der Albanipsalter in Hildesheim und Seine Beziehung zur Symbolischen Kirchenskulptur des 12. Jahrhunderts" (1893), he became privat-docent at the University of Berlin. His "Studien zur Geschichte der Sächsischen Skulptur in der Uebergangszeit vom Romanischen zum Gotischen Stil" (Berlin, 1902) traces the gradual development of German sculpture with reference to the period of its florescence in the thirteenth century. His "Die Kirchenthür des Heil. Ambrosius in Mailand" (1902) for the first time showed the door of the Church of St. Ambrogio in Milan to be a monument of early Christian art. Goldschmidt has also contributed a number of important articles on North-German painting, Saxon sculpture, and early medieval miniature manuscripts to the "Repertorium für Kunstwissenschaft," "Zeitschrift für Christliche Kunst," and "Jahrbuch der Kgl. Preussischen Kunstsammlungen." [-Jewish Encyclopedia].

The mounting Nazi pressure in Germany to dismiss Jews from positions of leadership hit Goldschmidt particularly hard. A patriotic German who had worked his life to elucidate the monuments of his own country, he resisted emigration until he was no longer permitted to use the university library. In 1939 he moved to Basel, Switzerland, with the aid of collector Robert von Hirsch (1883-1977) where he died in 1944. [-Dictionary of Art Historians]