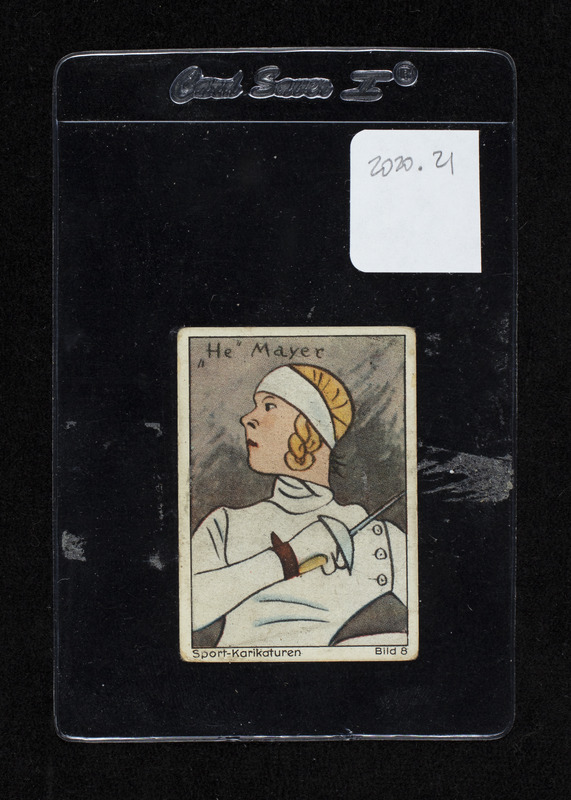 Helene Mayer (1910-1953) has been called one of the greatest female fencers of all time. She was born in Offenbach am Main in Germany to a Christian mother and a Jewish father. Mayer trained competitively in fencing as a child and was winning tournaments by age 13. At age 18, she won the gold medal at the 1928 Olympics in Amsterdam. She competed at the 1932 Olympics in Los Angeles, finishing fifth overall. Though an extremely popular athelete in Germany, Mayer stayed in California after the 1932 Olympics in order to study at Scripps College as an exchange student. She got a certificate in social work and then started taking master's degree classes at USC Berkeley. However, back in Germany, because of her Jewish background, her membership in the local fencing organization was revoked. Her education in the United States was also cut short when her exchange student status in Germany was cancelled. Mayer found work in California, teaching German at a local college.

In 1936, Helene Mayer was given the opportunity to compete for Germany in the upcoming Olympics in Berlin. Some countries had threatened to boycott the Berlin Olympics because of Germany's poor treatment of its Jewish citizens, and in order to avoid a complete cancellation of the 1936 Games, the International Olympic Committee insisted that Germany have some Jewish athletes on their team. Mayer, with her tall stature and blonde hair and blue eyes, became one of the few token atheletes with a Jewish background competeing for Germany. She earned a silver medal in fencing in the Berlin Games. During the medal ceremony, she gave the Nazi salute. Mayer said later that she had given the salute in order to protect her family that was still in Germany. Many considered her a traitor to perform such a shocking gesture, while others considered her a tragic figure who was used by the Nazis and the Olympic committees. After the 1936 Olympics, she returned to the United States and became a nine-time U.S. champion in fencing. She received American citizenship in 1941 but returned to Germany in 1952. Mayer died the following year, leaving few interviews and little correspondence.

Walter Trier was a German-speaking Jewish illustrator best known for his illustrations for the children's books of Erich Kastner and and the covers of the magazine Lilliput. He was born in Prague and moved to Berlin for school, where he studied under Franz Stuck and Erwin Knirr and spent most of his career. Trier bitterly opposed the Nazis and emigrated to London in 1936, where he worked with the Ministry of Information in the creation of anti-Nazi leaflets. He moved to Canada in 1947 to be closer to his daughter, and passed away in 1951.

Haus Bergmann was a tobacco company and cigarette manufacturer. The company was founded in 1920 in Dresden by Carl and Siegfried Bergmann. The carton packaging often included trading cards of famous people.