Eugen Prager founded the "E. Prager Verlag Bratislava Wien Leipzig" in Prague in 1934. He had worked for the E. Prager Verlag, Vienna, owned by his brother Emmerich, since 1931.

Prager published works by prominent Social Democrats and was banned from distributing books in Germany after the Machtergreifung. In Prague, he continued to publish left-wing authors and was aided financially by socialist groups. He published at least 20 books in Prague, including a few popular Austrian novels and Konrad Heiden's biography of Hitler.

After the incorporation of the Sudetenland into Nazi Germany, Prager ceased his publishing activities. He fled to England before the occupation of Czechoslovakia in March 1939. In 1940, Prager founded the Lincolns-Prager Publishing Ltd. in London. 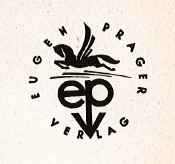