Henry G. Koppell and Fritz H. Landshoff founded the Alliance Book Corp. (ABC) on August, 15, 1938. Koppell had fled to Palestine after the Machtergreifung in 1933 and arrived in the United States in 1936. Landshoff represented three exile publishing houses - Querido, de Lange, and Bermann-Fischer - who wanted to develop an overseas market in the United States.

The ABC had a purchase commitment to buy 100 to 250 publications from the three exile publishing houses per annum. Furthermore, the ABC had independent goals, such as the publication of German-speaking émigré authors in English translations. By 1940, the cooperation with other exile publishers came to an end due to a lack of purchasers and to the escalation of the war in Europe. As a result, the ABC published only English-language books after the summer of 1940. 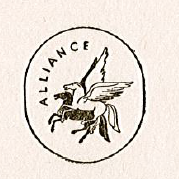